Putting Workers First with the SFL

Blog POSTED BY MARKETING
ON

What does it look like to run a province-wide engagement campaign right when COVID-19 hit? The Saskatchewan Federation of Labour’s (SFL) Putting Workers First campaign is a robust example of engaging, adapting and responding to the public with issues that affect not only Saskatchewanians but Canadians across the country.

In January 2020, the Saskatchewan Federation of Labour members from national and international unions sought to create a conversation to put public workers at the forefront and highlight the values of what it means to be a Saskatchewanian: hardworking, close-knit, community oriented and neighbourly. Working with the SFL, Stratcom developed a year-long campaign called ‘Putting Workers First’ that utilized texting, social media, and traditional tools to spread the message and connect with engaged audiences.

The campaign sought to create a central place with resources to connect the public with issues facing today’s workers throughout 2020 and into a possible election. Several of the themes raised were: rising cost of living, paid sick days, improved access and higher quality services (in education, medical and public services) and safe workplaces including proper equipment and supplies for frontline workers. These issues were incorporated in the overall communications plan and all public facing assets (i.e. social media posts, leaflets and website).

Stratcom was approached by the Saskatchewan Federation of Labour (SFL) to develop a two part campaign that included an initial research phase followed by an informed communications plan and engagement tools.

Stratcom conducted qualitative research to look at issues of concern and engaging with rank and file workers in Saskatchewan. The findings were used to build the communications and campaign platform with the objective of building online and offline support for the SFL and its affiliates.

Based on research insights, Stratcom developed a communications plan that included strategy and a distributed leaflet. Rebecca McNeil at Together spearheaded the website development while Stratcom’s in-house graphic designer conceptualized and designed the campaign’s primary graphical assets. 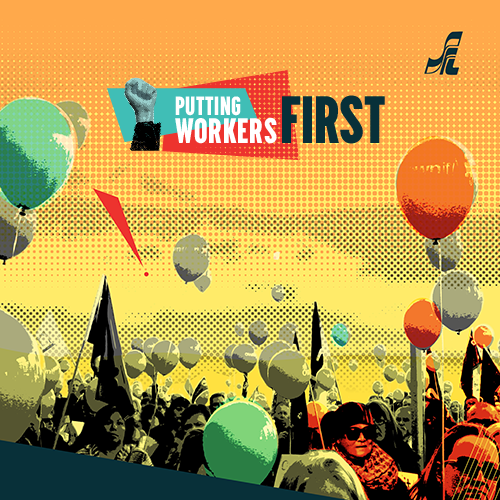 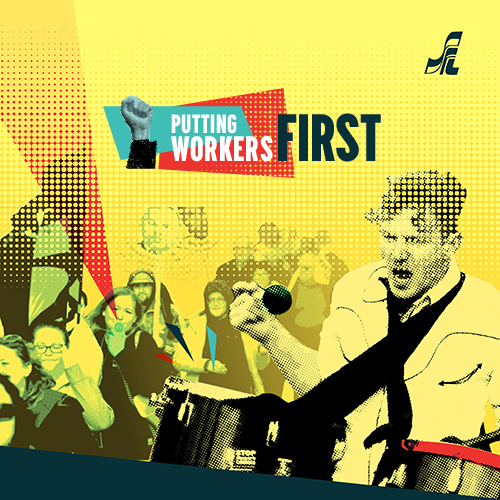 With the communications plan in place, Stratcom developed a leaflet that was distributed for Labour Day 2020 to support the SFL and union members at events across Saskatchewan. Stratcom utilized text blasts and peer-to-peer texting to drive traffic to the campaign website and support SFL’s work, particularly around the possible spring election and rise of the COVID-19 pandemic in May. Further digital engagement was also done in collaboration with Rebecca McNeil to develop lookalike audiences and tailored social media content and ads.

Results were successful, especially given the timing of COVID-19. Stratcom was highly responsive to the pandemic and quickly pivoted by adapting its messaging and techniques to fit socially distant protocols and virtual tools while still meeting the clients’ needs.

To date, on social platforms, the Putting Workers First campaign has generated more than 1 million total impressions and captured more than 2000 new leads. Engaged audiences were also shifted to a series of webinars for bridging folks who were identified during the campaign to continue connecting with SFL’s ongoing work. But it’s not over yet. Currently, the campaign continues to roll out with efforts focused on getting out the vote for Saskatchewan’s upcoming election.

Increased focus on what happens now and in the future of COVID?
Building a list of new mobile phone numbers with MobileReach