In early 2013, CAW and CEP engaged Stratcom’s services to create a new name and brand for the new organization being created from the combination of these two unions. This included a strategy to inform and engage members, and launch the new name and new visual identity of the new union.

In partnership with Pivot Design Group, our team developed a name and logo creation process that was inclusive, robust and fast-paced. The criteria for the new name were straightforward, but highly challenging: a single word which would work equally well in English and French, was not an acronym, and spoke to a notable new beginning for the union.

Utilizing the findings from the focus groups, Stratcom developed a comprehensive, multi-modal membership engagement strategy for the new union that included the development of a communications platform and plan which was comprised of 6 phases:

PHASE 1: COMMUNICATION TO LOCALS AND MEMBERS THROUGH A LETTER & WORKPLACE POSTER
Stratcom provided communications advice to CAW and CEP on the development of a letter to locals, and a workplace poster on how to find out more information about the new union. As well, the letter included an appeal to local unions to submit their membership information to be updated, centralized, appended, and returned. 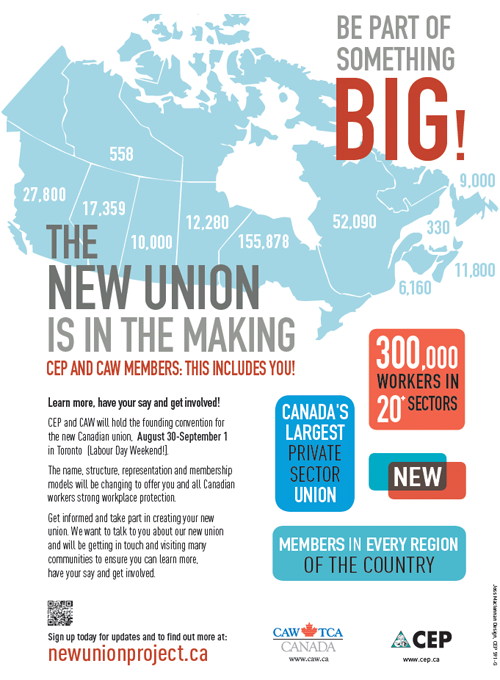 PHASE 2: MEMBER TO MEMBER KIT
Stratcom developed materials and artwork for a Member to Member Kit that could be used by union activists and local staff when talking to their members about the formation of the new union. The kit included info sheets, talking points and sign-up sheets. 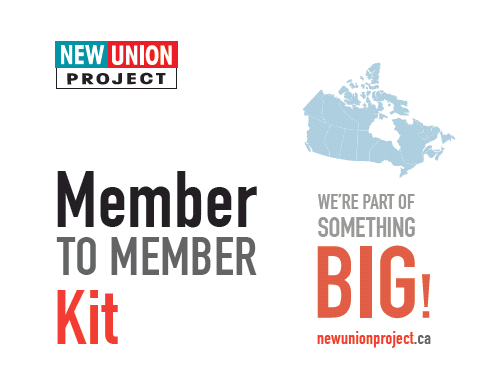 PHASE 3: LIST COLLECTION AND DATA ENHANCEMENT
Stratcom oversaw the collection of member information from Phase 1. This included updating, standardizing information and appending new data to member records for the purposes of using the member information to engage members more robustly.

PHASE 4: NEW IDENTITY LAUNCH EVENT, TELEPHONE TOWN HALLS, IBVMs, EMAILS, AND SOCIAL MEDIA
Engagement of the membership was crucial to the launch of the new name and logo for the new union project. As such, in the launch, Stratcom recommended a multi-modal strategy of engaging CAW and CEP’s memberships. An interactive broadcast voice message (IBVM) was sent to all members a week prior to the launch that informed them about an upcoming Telephone Town Hall (TTH) where members could ask the two presidents questions about the formation of the new union, as well as provide feedback on how aware they were of the formation of the new union. We held three TTHs for the members, one for the Eastern and Atlantic time zones, one for the Western and Northern time zones, and a TTH in french.

Stratcom, in collaboration with Pivot, CAW and CEP, planned and implemented a launch event that was festive in tone to celebrate and introduce the new logo and visual identity to the members and the public in Toronto on May 30, 2013. As well, on the day of the launch, members were sent an email with the new name and logo and a BVM with the new name and web address to visit to see the logo. In partnership with Pivot Design Group, Stratcom developed and assisted with the implementation of a social media strategy that amplified the announcement. In addition, we supported engaging with allies through online methods.

PHASE 5: DIRECT MAILING TO MEMBERS
Stratcom developed the copy and art for a direct mail package to inform members about the creation of Unifor, update them on Unifor’s activities, and to ask members for their opinion on how they wish to be involved in the union. This package featured a mail-back Survey piece (pictured below) intended to capture member input as well as demographic and personal contact information. 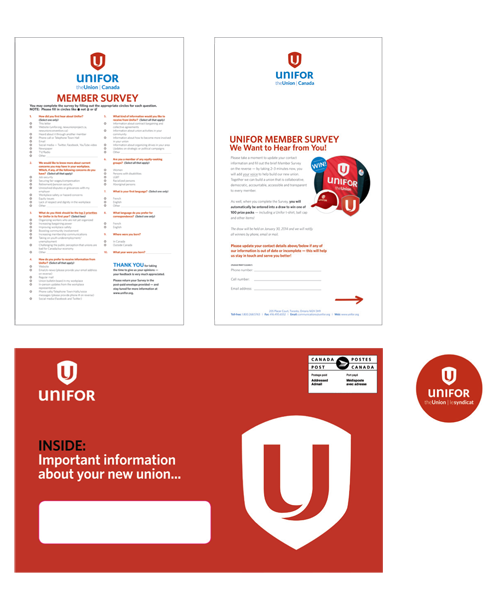 PHASE 6: CONVENTION PLANNING FOR MEDIA RELATIONS, SOCIAL MEDIA, TELEPHONE TOWN HALLS, IBVMs & EMAILS
Stratcom produced a comprehensive plan for media relations and social media around the Convention. As well, a series of IBVMs leading up to the Convention, and post-Convention TTHs with the newly elected leadership of Unifor are to be implemented as part of the on-going membership engagement process.

Since the beginning of our working relationship, Strategic Communications showed an incredible commitment to the success of our project. The challenges and problems that we unearthed through the research process were transformed by Stratcom into a series of solutions and actionable items that quickly showed excellent results.
Shannon Devine
CAW Communications Director

Stratcom provided expert advice, guidance and additional work capacity to the CAW and CEP to assist in the creation of the visual identity and provided a name and means by which to engage with their membership around the formation of Unifor. The launch event received considerable media coverage across Canada. Members and activists supported the new identity and name, and the leadership of each respective union were very satisfied with the outcome. 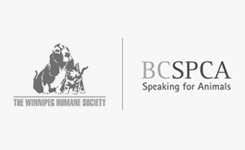 Read more
Through working with Stratcom, we also learned how to improve our own internal planning processes which will have long lasting benefits for us as an organization.