MP Kennedy Stewart, as one of the strongest voices in Ottawa against the Kinder Morgan pipeline, needed to connect with thousands of anti-pipeline advocates. The fight against Kinder Morgan was in full swing and MP Stewart wanted to give constituents an opportunity to ask their questions about the pipeline, learn about the legal process of stopping the project. MP Stewart wanted everyone to be able to join the conversation without having to travel to an in-person town hall. 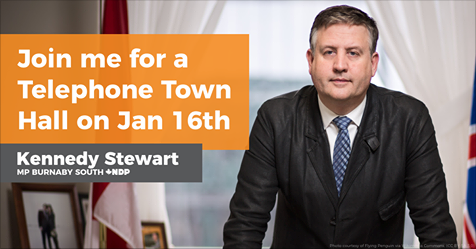 On January 16, 2018, Stratcom helped MP Stewart call 19,000 anti-pipeline advocates and invited them to join his Telephone Town Hall (TTH) about the fight against Kinder Morgan. The phones buzzed throughout the night and over 100 participants joined the queue to pose questions to MP Stewart, Indigenous leader Charlene Aleck, elected Councilor for the Tsleil-Waututh Nation (TWN) and a spokesperson for the TWN Sacred Trust Initiative, and lawyer Dylan Mazur of the BC Civil Liberties Association. Participants received answers on a range of topics from the legal implications of civil disobedience and what peaceful and practical actions people could take to stop the pipeline. 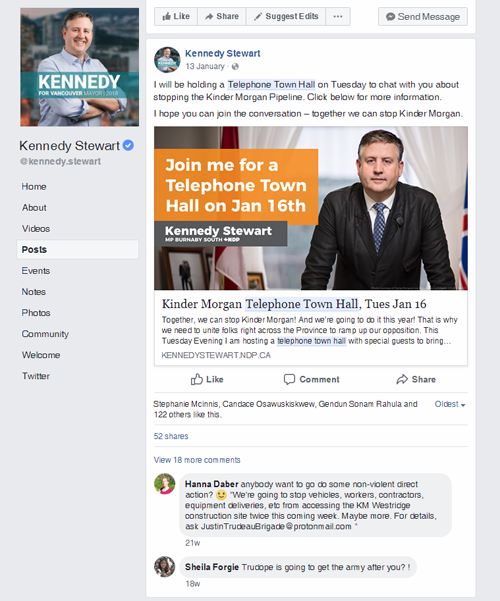 The participation exceeded expectations. The engagement figures were impressive: 2,400 people participated in the TTH, 119 people called in to join the TTH, and 110 people entered the queue to ask the speakers their questions. At the halfway mark, 700 people were still glued to their phones. After the event, 57 people left voicemails for MP Stewart and the speakers.

As impressive as the engagement figures were, they were just one part of a larger story of how the TTH helped bolster the movement. Participants learned about the role of Indigenous leaders and how all Canadians opposed to the project can come together to stop it. People who wanted to show their support for the movement but didn’t know how learned ways they could contribute their efforts. Participants asked clarifying questions about often-misunderstood topics, such as how the pipeline had already received federal approval. By holding this TTH, MP Stewart effectively and efficiently mobilized thousands as a continued expression of his leadership against the pipeline.