The Society of United Professionals is a union of 8,000 professionals across Ontario including engineers, scientists, supervisors, and lawyers.

As The Society of Energy Professionals continued to grow and diversify their membership, a rebranding became necessary in order to ensure an authentic representation of its entire membership. In February 2018, the union held a referendum to change its name to the Society of United Professionals, as well as implement some much-needed constitutional changes.

With a history of low voter turnout, the Society knew it had to turn to a variety of engagement channels in order to reach as many of its members as possible.

Telephone Town Hall
While the Society had planned a number of in-person member meetings about the rebranding, there was a need to engage the members working in rural areas of Ontario as well as those who were unable to physically attend meetings.

The Society held a Telephone Town Hall with President Scott Travers on February 5, 2018 for 5,700 of its members. Members were able to get a detailed explanation of the rationale for the rebranding, as well as the proposed constitutional changes, and to ask their questions directly to President Travers live on the call. Engagement was very high, with over 700 members tuning in for the event and staying on the line for an average length of 30 minutes.

Digital
Using the Social Capital function in NationBuilder, the Society segmented a group of 1,855 textable members who seemed most likely to vote based on their previous engagements with the union. These members then received a series of email blasts with unique voting login details for each member. After eight days of voting, there were still about 862 members from the list who hadn’t cast their ballot.

The Society then turned to Hustle, a peer-to-peer text messaging tool. They created a Get Out The Vote texting campaign with personalized texts asking their members if they planned to vote. 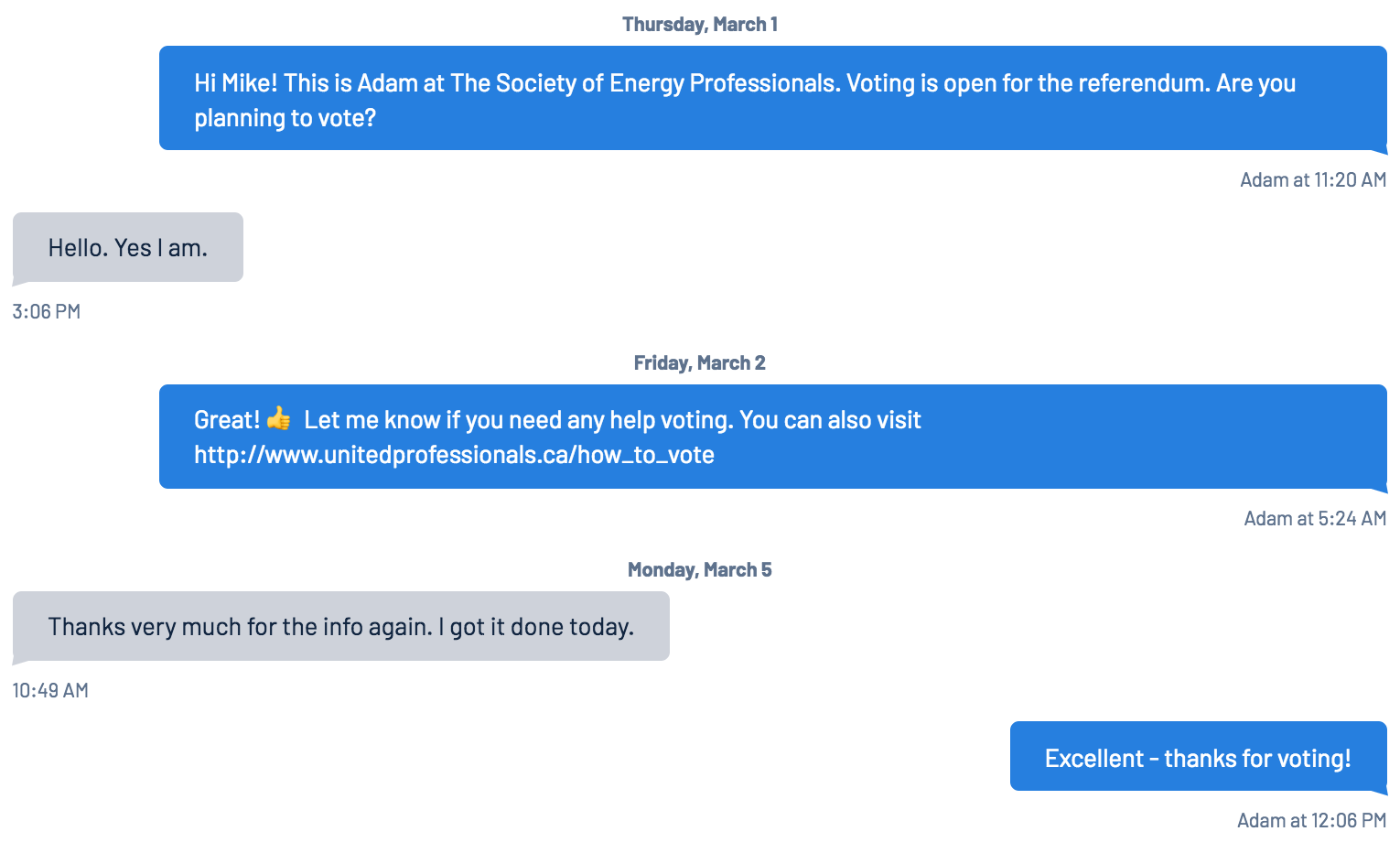 An example of a Hustle text conversation with a SUP member.

The Hustle campaign saw a 25% response rate, 80% of which were positive actions from members who messaged back saying they would now go and vote. Texting also presented the Society with an opportunity to answer their members’ questions and help them navigate the voting process. Through this combination of email blasts and Hustling, they were able to initially reduce the number of late voters from 862 to 685, ultimately bringing down the number of non-voters in the list to 483.

By leveraging a multi-channel digital engagement strategy, the Society experienced a 74% turnout rate for this segmented group of 1,855 members.

The primary goal of the Executive Board for this referendum was to obtain the 25% turnout required to reach quorum. Thanks in large part to their diversified approach to membership engagement, they reached this goal just a day and a half into the voting period.

At the conclusion of the 14-day referendum, the Society achieved an historic voter turnout of 59.5%, with 81% voting in favour of the name change and proposed constitutional changes.