In local politics, failure to execute can be more dangerous for a politician than pushing through an unpopular agenda. Toronto Mayor Rob Ford has not executed well on his promises, but he’s also left it too late to start a new legislative agenda. His strategic path to victory in 2014 now passes through the land of effective day-to-day political leadership – a rather banal circumstance for an outsider who came to fix City Hall.

Ford’s approval rating among Toronto voters continued to drop in Stratcom’s latest poll, conducted May 15 (margin of error +/-3.2%) – down 9 points to 34% since our last survey in February.

The trend is clear across all regions of the city, including North York and Scarborough, reputed home of the ‘Ford Nation’ that brought him to power in the October, 2010 election. (The apparent exception, Etobicoke, is Ford’s home turf although we believe it is an outlier in our data because its smaller population means a small sample size in our latest polling. The uptick in May 2012 is within the margin of error for this subsample.) 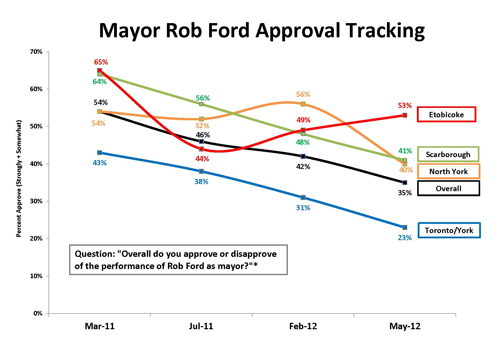 The data are quite clear: the overall loss of approval ratings started early and has not slowed.

However the history of electoral politics is rife with unexpected comebacks by scrappy fighters who turned their unpopularity around to win re-election. But there are different kinds of unpopularity in politics – there is the type of voter disapproval that happens over a legislative agenda. This is the type that splits the electorate between ‘for’ and ‘against’ – as Mike Harris and Pierre Trudeau did, and as Stephen Harper is now attempting to do.

This was the narrative promoted by Mayor Ford and his older brother, the voluble Councillor Doug, around the transit file – they were fighting for subways to Scarborough, against presumably downtown forces pushing for a light rail plan across a larger part of the city. Doug Ford even launched a populist ‘Save our Subways’ campaign in a clear bid to establish an unbeatable wedge issue for the 2014 election.

The trouble is, Rob Ford’s mayoralty doesn’t suffer from doing too much, but rather from doing too little. It would be one thing to get shovels in the ground for a subway that the opposition at City Hall wants stopped, but quite another to lose the decisive battles on the council floor and then try to raise a citizens’ army to storm the barricades for a hypothetical transit line that has no work crews, no funding, no plan.

John Lorinc, writing on the Spacing blog put it this way: “Voters in those parts of the city, it would be reasonable to surmise, may be growing weary of Ford’s empty and undeliverable transit promises.”

One could argue the same thing has happened on the budget file. Despite some kudos (some fair ones, in my view) for opening up a better public review of the city’s finances, Ford and his allies couldn’t find much of the ‘gravy’ he has promised to unearth at City Hall. Dispensing with promises to protect services while saving taxpayers millions, his budget chief promoted cuts to popular city services including libraries and parks, but then managed to lose the decisive votes at council to implement his budget priorities. He came away with one marquee victory (scrapping the vehicle registration tax), but overall his political management skills proved totally insufficient to push his financial agenda forward.

(Ford’s record of wins/losses at Council is usefully summarized in charts by the Toronto Star.)

There are those at City Hall who rattle off a list of Ford’s accomplishments, including settling with the city’s unions on terms favourable to the bottom line and privatizing garbage pickup west of Yonge Street.

But if those accomplishments are politically beneficial to the Mayor, we should see his approval ratings improving or stabilizing, not getting worse. This brings us to our second chart, which illustrates the way voter attitudes have changed fundamentally in the past few months. 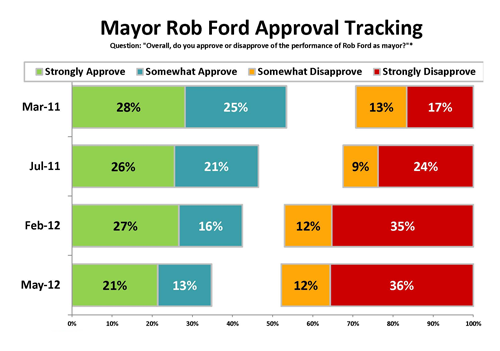 From the start of his mandate until the start of the dramatic series of council transit votes in February and March of 2012, Mr. Ford grew increasingly unpopular with a certain segment of voters (many downtowners, as the media tends to over-emphasize). Look at the red segment of each bar, from top to bottom: these are voters who strongly disapprove of Mayor Ford’s job performance, and they double in size from 17% in March of 2011 to 35% in February of 2012. But then it stabilizes and doesn’t change in the May polling results. This is a large number of voters, but, arguably, they are now as big a group as they’re ever going to be and they disapproved of Ford before he lost control of the transit issue to his political opponents.

Meanwhile, note how the green bars on the left (voters who strongly approve) is also not changing throughout the period up to February 2012 (bouncing around 26-28%). Until the transit votes, Ford’s core voters (centred in North York and Scarborough) didn’t waver – they remained a large group of people — more than 1-in-4 residents of the city – and whatever Ford was doing to inspire such dislike among the ‘red bar’ voters, it was having no real effect in his core constituency.

We polled in February one day after city council re-affirmed the original LRT plan (‘Transit City’ which did not include a Sheppard subway as promoted by Ford.) In subsequent weeks, this was followed by Council’s specific rejection of Ford’s subway plan, the Mayor’s retaliatory firing of TTC GM Gary Webster, and council’s further rebuke to the Mayor when it removed his allies from the Commission itself.

When we polled again in May 2012, that green bar on the left shrank significantly (to 21%) for the first time since Ford took office. The dynamics of his approval rating has changed, and it is no longer a story of how more and more people who didn’t vote for him disapprove of his performance, but rather of how fewer and fewer of those who did have faith in his leadership abilities.

In light of all of this, Ford’s surprise appearance at the anti-homophobia flag-raising on May 17 and his decision not to press ahead with outsourcing garbage pickup east of Yonge Street until after the next election make political sense. On one hand, he needs to convert some of the huge number of voters who disapprove of his performance into believers, and on the other he needs to change the channel for 2014 from subways to something he can reasonably accomplish in a second mandate.

That is, if he runs again, which is by no means a foregone conclusion at this juncture .

John Willis is the Director of Campaigns & Research at Stratcom. He is a specialist in opinion research and non-profit communications. John regularly participates in civic elections.

Mind the Generation Gap: A Message from Your Boomer and Gen X Donors
#silenceonparle